Recently, Nicki Minaj did an interview with Angie Martinez. She address several issues, one of the most interesting parts of the interview, was Nicki speaking out on the Lil’ Kim issue. I most definitely am a Nicki Minaj fan. I love her, but she needs public speaking training. She gave too much, and what she was saying, could put her in a negative light. She rants, for about 5 minutes plus about Lil’ Kim. She sounds really cocky, and that’s never cute. I don’t like how Lil Kim keeps Nicki’s name in her mouth, always talking about the girl doesn’t pay homage when its clear that Nicki did pay homage. But some of the things Nicki was saying was unwarranted. I want less talking, and more lyrics. Rappers battle with music. So if they aren’t going to squash beef, Kim needs to respond, and not by taking to the blogs and radio, but with a record. Because Nicki killed Roman'a Revenge, by taking direct shots at Lil Kim. 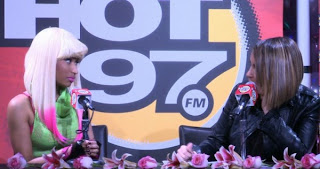 Here's What Nicki Had To Say:
“She just really jumped out the window and you got to be careful when you pick fights. That’s what I’ve learned in the business you just never know umm, I think people get me mistaken with like a real Barbie; they forget where I’m from and if I have to revert back, I can and I will. So don’t play with me, its one of those moments where you say don’t play with me. You know because I respect you, I love you, I said it in every interview time and time again, and if that’s not good with you momma, then its something deep rooted in you, you need to get your………… something is brothering you inside, that’s your insecurity bothering you.”


“Every time you in the news it’s because you getting at somebody where’s your music? You know put your music out when I see your name on billboard that’s when I’ll respond to you; other than that goodbye!”


“You know when a Mom gotta beat you and she be like it hurts me more to beat you than it hurt you, it doesn’t take away the love that I have.”


“You want to know what scares people, success. When you don’t make moves and when you don’t climb up the ladder everybody loves you, because you are not completion but when you become completion then people start, ‘hold up, wait’”


“You gonna go down in history as a sore loser, instead of going down as the Queen because if you can’t beat them join em. If you don’t have anything nice to say don’t say anything at all.”


“Why in the black community we gotta hate on each other? Instead of saying thank you for showing me love thank you for you know keeping my name alive, you know, the same way she opened doors for me, I am now opening doors for her, do you understand what I’m saying; because nobody was playing your music and you damn sure couldn’t get an interview to save your life. But now you are getting interviews and every time you get an interview that are asking you about Nicki Minaj.”